Teflon (PTFE) because of its excellent chemical stability of high temperature resistance, known as the “plastic king”, it is often used as a membrane separation material. But because the material molecular structure is highly symmetrical, causing its surface hydrophobicity to be strong, this affects Teflon in the bonding and liquid filtration and other applications. This question had been troubled Teflon coated fabric suppliers for many years. In order to make up for these shortcomings, the major Teflon coated suppliers in the world spent a huge investment on the PTFE membrane modified.

At present, the major suppliers commonly used chemical method, high temperature method and plasma method and other methods to deal with PTFE membrane surface. But the surface of the Teflon film treated by the chemical method is obviously darkened and the ontology of the material is affected. PTFE will evaporate toxic substances.in high temperature melting process. And the plasma method has the effect of changing the surface properties of the material in a short time without affecting the inherent properties of the substrate, and the process is dry processing, saving energy protection environment.

In this paper, Ar is used as the treatment medium to treat the Teflon membrane, the grafted AA monomer further enhances its hydrophilicity to address the timeliness of plasma treatment. The effects of different plasma treatments and grafting processes on the hydrophilicity of Teflon films were investigated, and the contact angle was used to characterize the hydrophilicity of FTIR. The solution and the corresponding results in this paper, there have a huge reference value for the suppliers of Teflon coated fabric, Teflon adhesive tape and Teflon conveyor belt.

The Teflon membrane was ultrasonically cleaned with absolute ethanol for 30 min, after drying, put it in the reaction chamber of the quartz stent, Vacuum to 2 ~ 6Pa, through argon, draining the residual air in the reaction chamber, adjust the needle to control the gas flow in 10~60cm3·min-1, adjust the pressure to 20 ~ 100Pa, After stabilization, start the RF power source, the Teflon film was pretreated by plasma, processing power of 100 ~ 500W, processing time of 30 ~ 300s.

Surface graft polymerization
After the plasma pretreatment of the sample with air contact oxidation for a period of time, put in the concentration of 5% to 45% of the AA solution, heated to 3070, the processing time is 214h, After the reaction, remove it and wash it in 40 distilled water for 12 hours.
Performance test and structural characterization
Contact angle
The contact angle of the PTFE film surface was measured using a contact angle meter, and the measurement was carried out at a room temperature and humidity of 30% RH, using micro-injectors to control the droplets in about 2μL, the average of the five points measured on the same sample surface is taken as the final contact angle.

ATR-FTIR
The change of membrane surface structure before and after modification was analyzed by attenuated total reflection Fourier transform infrared spectroscopy (ATR-FTIR), ATR-FTIR analysis of the scanning frequency is 30 times, scanning range is 600 ~ 4500cm-1, the minimum resolution is 2cm-1.

The effect of the contact angle of the film surface on the treated power is shown in Table 1, Membrane surface wettability with power changes shown in Figure 1.

The reason is that the level of power represents the amount of energy that can be accepted on the surface of the membrane, and the power increases so that the energy obtained by the quantitative argon molecules also increases, the chemical bond of the membrane surface molecules is increased by the probability of being opened, and the number of hydrophilic groups formed by further combining the free radicals in the plasma increases, thereby reducing the contact angle of the film surface. However, when the power is too large, the plasma generated free radicals between the probability of binding will increase, can not effectively combine the free surface of the membrane surface.
Considering, the best processing power is 300W.
Effect of Plasma Treatment Time on Surface Wettability of Teflon Membrane
By changing the treatment time, to study its effect on the film surface wettability, the results shown in Figure 2 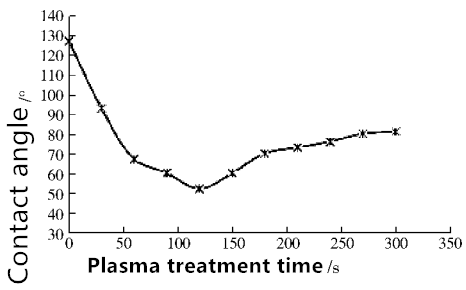 Fig. 3 The principle of plasma treatment on the hydrophilic modification of PTFE membrane

According to the above, both to ensure that the hydrophilic modification effect can improve the experimental efficiency of the best processing time is 120s.

The effect of the gas flow on the film surface wettability was investigated by changing the gas flow rate. The results are shown in Table 2. 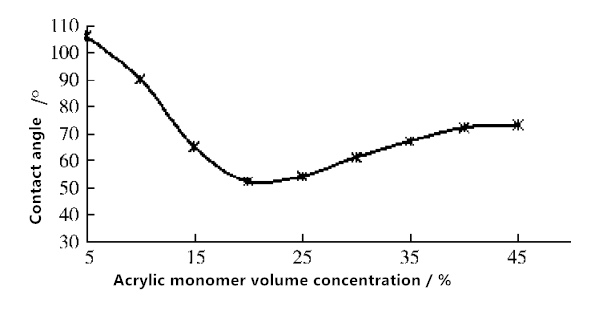 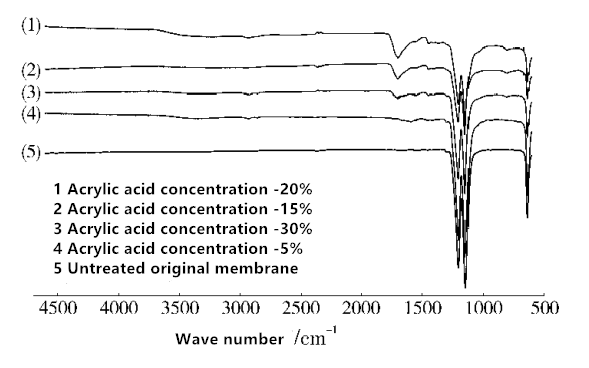 The effect of graft reaction time and temperature on the contact angle of the membrane surface is shown in Fig.6. 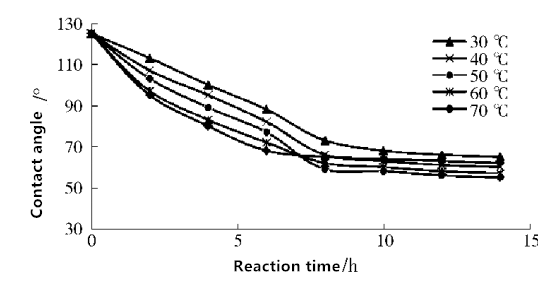 Conclusion
The results of this paper show that, Teflon hollow fiber membrane by Ar plasma treatment and then grafted AA monomer, the number of hydrophilic groups on the membrane surface increased significantly, surface energy and surface activity increased, the hydrophilicity is greatly improved and the modification effect is long, Thus broadening the scope of application of Teflon hollow fiber membrane for membrane separation systems in the field of waste water treatment.

If you need more information about our products, please contact us: infocorefrp@gmail.com ,our engineers will answer you and provide free samples.

We can provide A4 format size samples for free.